When I lived in Taiwan, and the Philippines, and traveled around Southeast Asia, I would often see families of four traveling together on one motorcycle. They might have their family pig strapped to the front, or a full-sized door balanced in their arms. Here in India, it's the same thing, and though it's hard to get the shot from inside a moving car, I am pleased to be able to show you my coveted photo of the family of four, along with families of three, babies, and -- of course -- very few of them wearing helmets. Perhaps these two gentlemen think their turbans would protect them in the event of a 60km/hr head-on collision. 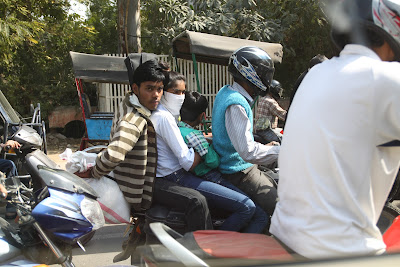 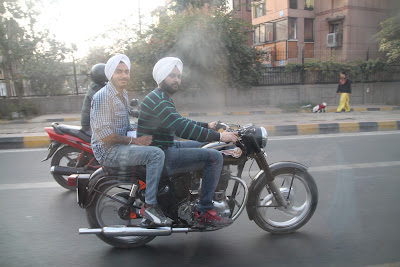 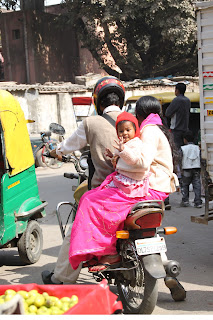 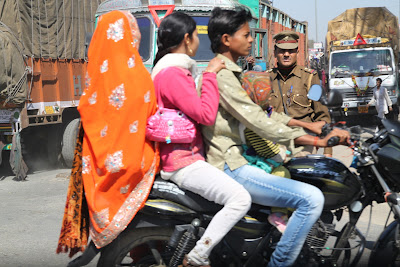 There is a kind of space efficiency here that you just don't see in the US, or Western Europe. For example, a bycicle-powered school bus/cart that can easily carry ten children. Safety be damned. 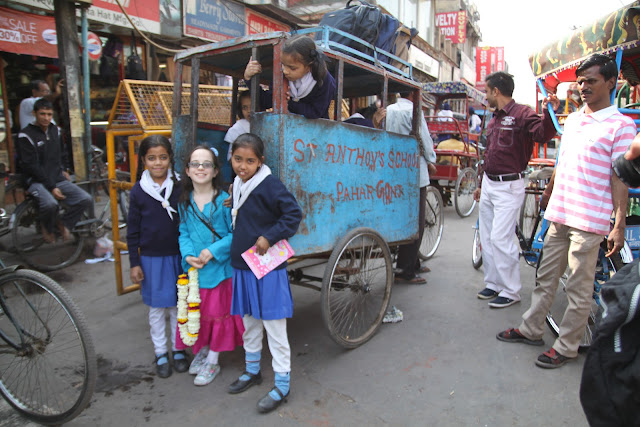 The truth of the matter is that India has plenty of rules and regulations for driving. It's just that nobody seems to follow them. For example... 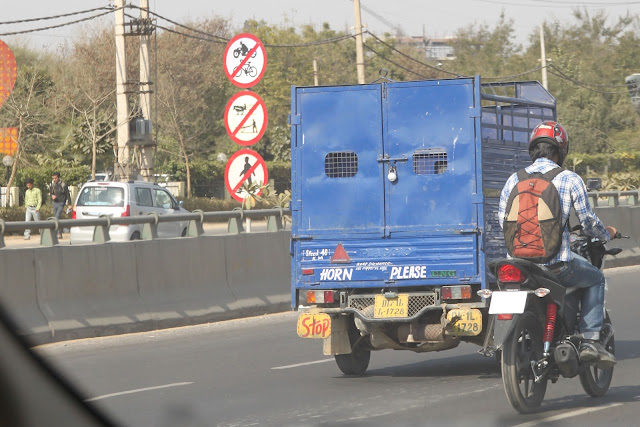 The reality: rickshaws, bikes, animal-drawn carts, hand-pushed carts, oversized loads, pedestrians, and at least one hookah-smokin', turban-wearin', donkey-rider in the middle of the road, and frequently facing into oncoming traffic. The occasional lane markers are not so much a guideline as a suggestion, and not even so much a suggestion as a figment of somebody's fantasy. 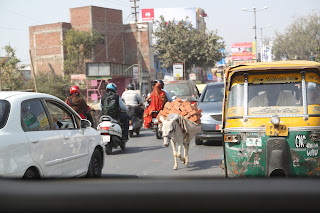 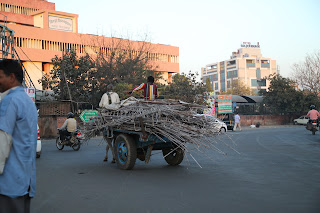 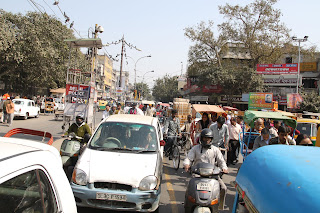 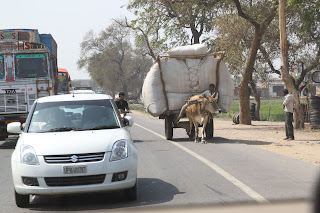 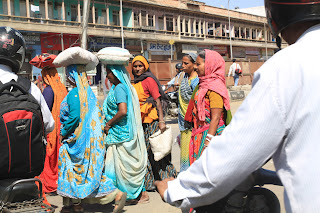 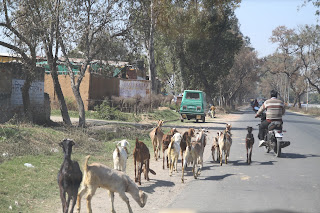 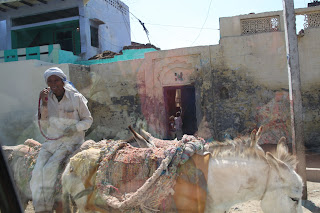 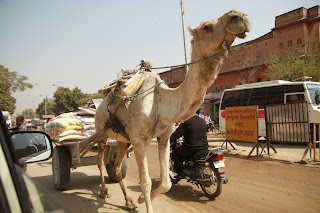 Along with the braying, clomping, snorting, and the roar of the cars and motorcycles, you also have a near-constant noise from the horns. It is so extreme, between this and the garbage everywhere, that by the time we return to Paris and drive home on the highway from Charles de Gaulle airport, entering the city through a relatively ugly and industrial section in the 12th arrondissmenet, Gigi will turn to me and croon, "It's so peaceful here! It's like being in the countryside!" 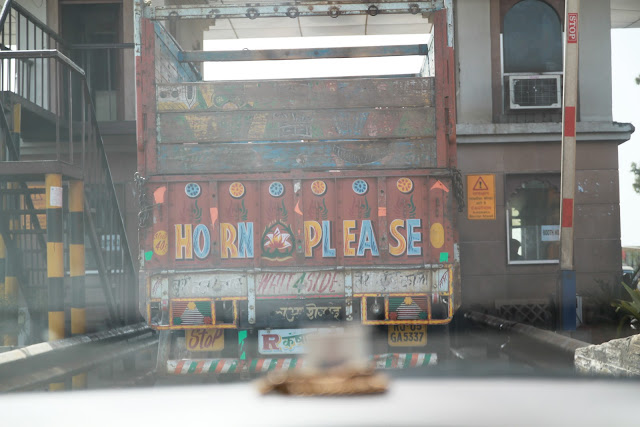 But all of this chaos and disorder has a certain charm -- especially to us seat-belt wearin', rule-followin', red-light-stoppin' tourists.

While we undoubtedly have a special place in our hearts for the Taj Mahal, or riding the elephants in Jaipur, or being attacked by monkeys, you could also make the argument that riding in the rickshaws and tuk-tuks (the motorized tricicle rickshaws) may well be the highlight of the trip and the thing we will most remember. My mother normally wouldn't back out of the driveway without her seatbelt on, but here, she has no choice but to laugh about it as her grandchildren ride backwards without belts through crazy traffic. In fairness, she does point out that a) we usually aren't going faster than 20-30 mph in these vehicles and b) that the first time I brought home Gigi as a baby to visit my parents, I threw a hissy fit when they hadn't installed the car seat properly. But when I'm in Asia, rules and safety fly out the window. I just hope that the children don't. 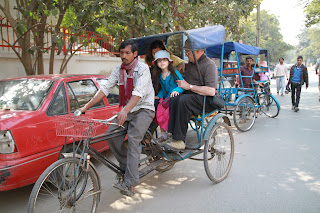 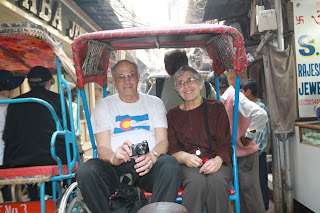 In Jaipur, we hire out a tuk-tuk for our first afternoon to take us around the city (at 100 rupees or $2 per hour, after tip). Our driver Salim proudly tells us that his tuk-tuk is new. And it shows. 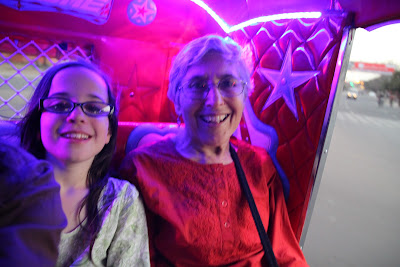 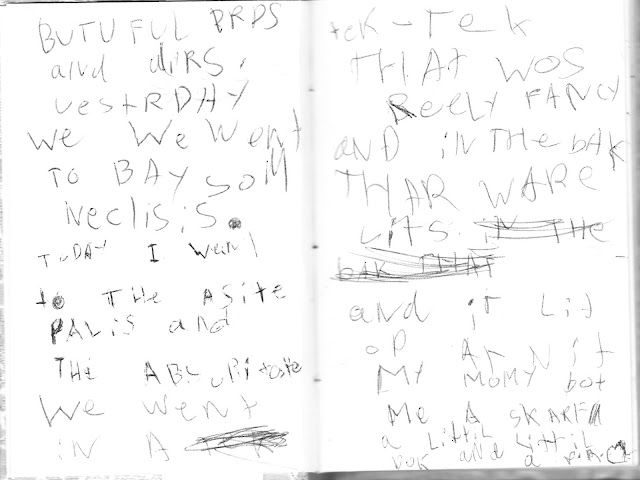 It makes a big impression on Pippa, who writes in her journal entry above, "We went in a tek-tek that wos reely fancy and in the back thar ware lits and it lit op at nit." [Ed. translation:We went in a tuk-tuk that was realy fancy and in the back there were lights and it lit up at night.] The disco tuk-tuk is one of the first things she describes to anybody who asks about her trip here.

The following day our tuk-tuk is an old, shabby thing that our driver, Gopal, claims has been in service for twenty years. This does not seem likely, especially since we are later told that under commercial vehicle regulations, tuk-tuks are not allowed to be on the roads for more than twelve years. However, we've seen how much they follow other rules of the road, so why not break this one, too? Gopal, it turns out, is my father's kindred spirit, and my father is happy to get out and help make the necessarily manual u-turn in the small alleys. 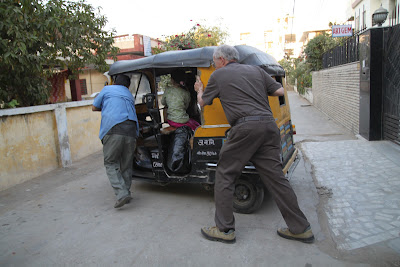 At two different points in our afternoon, Gopal receives calls on his cell phone. Whether it's law or common sense, he does not drive while he's on the cell phone. But much to our amusument/ amazement, he doesn't pull off to the side, either; he simply stops in the middle of the road to talk on his cell phone, while traffic flows around us like a stream around a boulder.

We spend extra time in the way of traffic, because we also run out of gas in the middle of the road. But Gopal gets on the phone, and within two minutes, help has arrived. It is his son, also a tuk-tuk driver, who syphons off a touch of gas from his own tank. Pulling into the gas station to fill up, we are stunned to run into somebody we know. My brother makes fun of me for always running into people I know in incredible places. And it's true that on our second day in India, we are walking through the American Embassy compound when I spot a familiar face. As we pass by, I blurt out, "Didn't I go to Princeton with you?" And he turns around, and I realize that, indeed, he was a year ahead of me at university. My brother is further entertained by this as it turns out this man is the DCM (Deputy Chief of Mission, #2 under the Ambassador) at the U.S. Embassy, so within 48 hours, my social connections are, evidently, already better than my brother's. At the gas station, we see that the tuk-tuk in front of us in line is Salim, and we all cry out to him, as if he is an old friend. Here's a photo of Gopal (left, in blue) and Salim (thought by mother to look like an older Indian version of my brother-in-law Paul) -- two of the best Jaipur tuk-tuk drivers that $2/hour can hire. 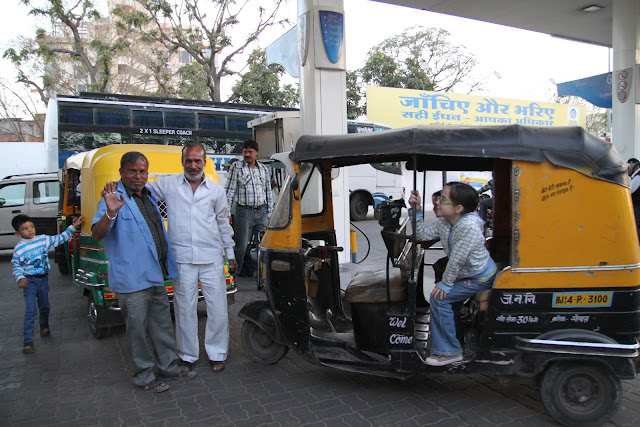 My parents and I laugh till we cry when my mother, who has been looking for the perfect way to encapsulate our trip here, wisely notes, "Once you've driven in a tuk-tuk next to fornicating donkeys, you've pretty much seen it all." 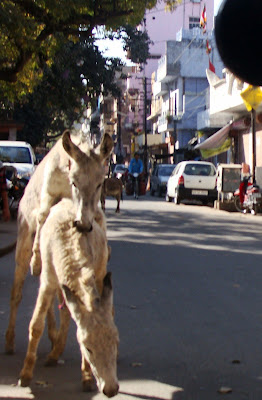 When traffic looks like this, you need some sort of talisman or guardian angel. I can't give you either of those, but in the spirit of the old Irish blessings "May the road rise up to meet you," I offer you this, seen on the back of this truck and, presumably, trying to wish you Good Luck. I can't help but think that, along with the admonition underneath, to "Use dipper at night," it actually says something slightly different. 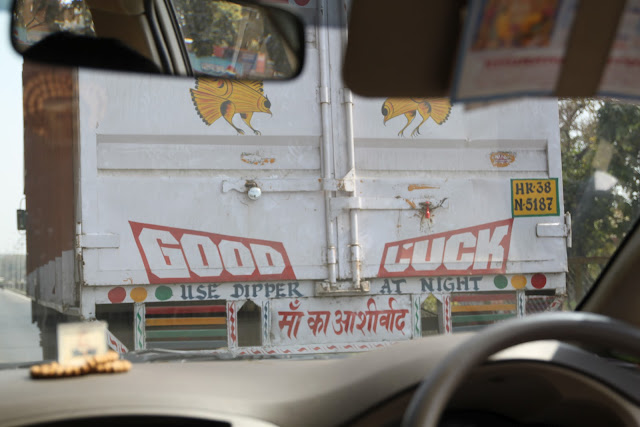 Email ThisBlogThis!Share to TwitterShare to FacebookShare to Pinterest
Labels: animals, living conditions, on the road