What Runs Through My Head

When we were doing the renovation of our house in San Francisco and gunning for the permit from the city, our architect taught us the term EFSI, which stands for Every F***ing Square Inch. That acronym runs through my head a lot here, since the Indians seem to use EFSI for something. On the sidewalks, we see people fixing shoes, a dentist actually pulling teeth, barbers cutting hair and operating entire salons, and people living, cooking, working (in one photo below, she's ironing) and just, in general, living their lives. There are, simply, too many people and not enough space, so there's no choice but to take it to the streets. We even see people gardening in the median of the highway. This, of course, means that EFSI is not just full of people but also their stuff and their garbage, and usually all of the above. Granted, we have only been to a limited number of places, but it seems true not just in the big cities, but the smaller ones as well (Jaipur, Baradhpur, even in the drives between the cities). 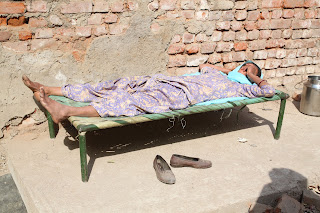 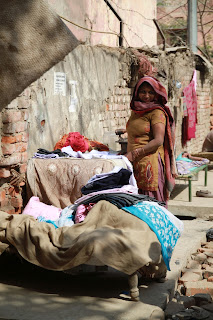 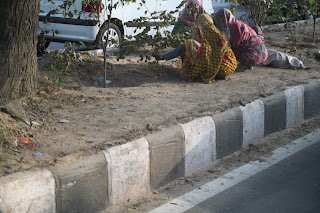 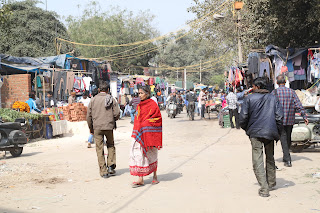 We see many beggars, of course. Some are disfigured, sometimes self-inflicted in order to beg more successfully (but how can we know which is which?). The hardest may be the children who come up to the cars in the middle of the road. We try to give out pens and paper, and G is initially very enthusiastic about it, but it gets a little too intimidating almost immediately. The children start clamoring around the car and reaching their hands in to grab things. My father cannot help but give some money to some of the kids, despite the fact that a) they are sometimes sent out as part of a racket and b) poorer families will choose to send children begging on the streets, if they can be successful, rather than send them to school. My neighbor here in Paris is in full agreement with my father's approach, saying, "Yes, but these particular children are never going to school anyway, and they need the money." It's a very tough moral dilemma, really, and the problem is so entrenched in the local way of life, it's hard to imagine it will ever be solved. 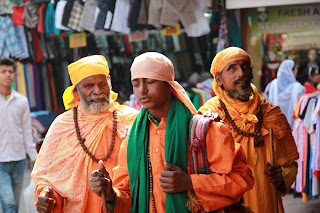 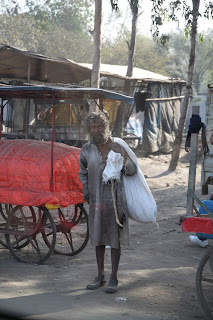 Another thought that frequently runs through my head is "What a pigsty!" And, in literal terms, that's not so far from the truth. There are animals all over, in the cities as well as the country. Cows, pigs, goats. They are released from their homes for the day to go grazing around the city, eating whatever isn't plastic from the garbage piles in the streets and sidewalks. There is not as much manure around as you'd expect, presumably because much is gathered, made into cow patties, and dried out for use as fuel. Still, between the animal manure and human feces, you do get some pretty strong smells every once in a while. This would be another excellent use of Smell-o-vision, if it existed. 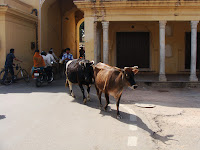 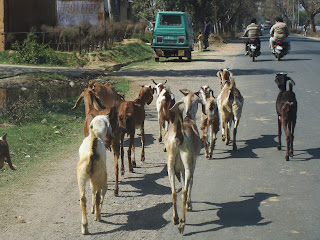 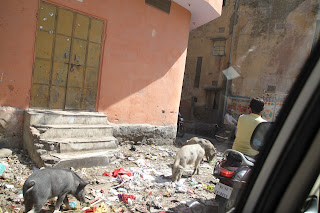 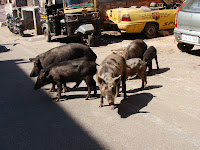 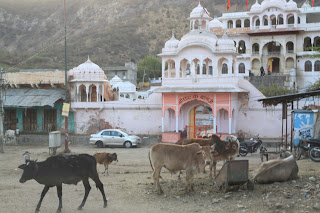 Also in my head: one of the reasons you can crate-train dogs is that they know not to crap in their own home. So why don't the people here know this? People throw their garbage everywhere. On approximately Day 11 of our trip, when we ride the elephants to the Amber Fort, we see a garbage can -- our first in the country. It's so noteworthy, I take a photo. I have been carrying our garbage around in my backpack or pockets ever since we got here, and can only unload it at my brother's house or at a hotel. I presume it is then taken from the house or hotel out to the road and dumped anyway. At one point we are going through what our driver tells us is a fancy neighborhood. It doesn't look much different, frankly, but I guess I can see that there are gated, guarded homes. A woman (maid?) comes just outside the front gate of her house, takes the family garbage -- food, papers, plastics, and all -- and hurls it like slop onto the road. We sometimes see people out sweeping -- but just sweeping, not gathering. They sweep it from one spot to another then call it quits. 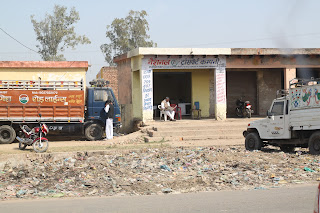 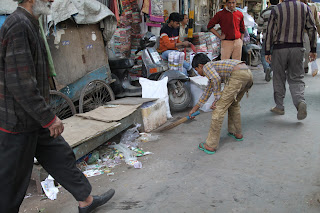 When the women come up to us begging with babies on their hips, what runs through my head is that this country really needs to encourage contraception. Actually, that's a very gentle way of expressing what I'm thinking, which is so un-Democratic, so un-ACLU, and so un-PC that I don't think I can put it on paper... But basically, it strikes me that all of India's woes would be greatly, enormously, tremendously reduced if you could just solve the overpopulation problem. And the irony, of course, is the same worldwide: it's generally the poorest and least educated part of the population that has the greatest number of children. It shows more than usual here. P & G no longer wonder how people can tell we're "rich" and know to beg from us.

A couple factoids (compiled from Wikipedia):

Email ThisBlogThis!Share to TwitterShare to FacebookShare to Pinterest
Labels: animals, living conditions, on the road