We are currently in Jaipur, staying at the Madhuban heritage house, at which the Queen of England once stayed, or so they say. They have a lovely (by Indian standards...) garden where they serve breakfast (as well as show eyebrow-raising puppet shows), and as you can see from the photo, I have good reason to fear that my children are getting spoiled. 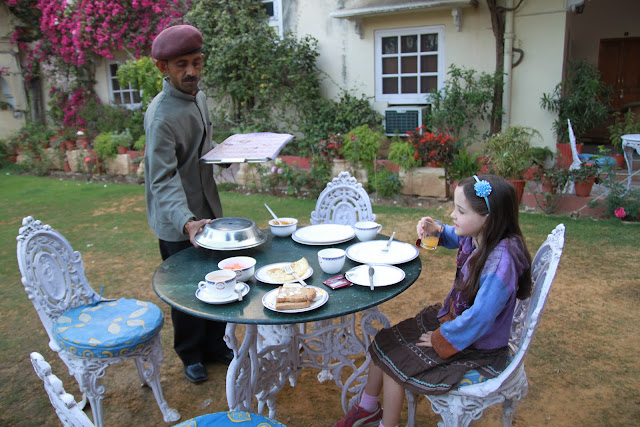 I must say that while this is a grand adventure for my kids and parents, it's kind of adventure-lite for me, considering how much of my traveling was done in my twenties and early thirties, with either my brother, my friend Andi, or Anthony, and generally on about $30 a day -- food, lodging, transportation, entry fees, bribes, and souvenirs included. Historically, I have just thrown caution to the wind. Whereas this is more like throwing rupees to the wind. I feel relatively okay about this for myself, and my parents, but fear that my children won't ever understand the joy of sleeping outdoors on a luggage cart at a train station in Germany, simply because one is trying to save the $7 overnight hostel fee. For other examples of the high life to which my children are getting accustomed, see the photos below: high tea at the Imperial Hotel in Delhi, our hotel room in Agra, and one of the many overpriced English-language-menu-with-Chinese-food-option-for-foreigners restaurants at which we dine. 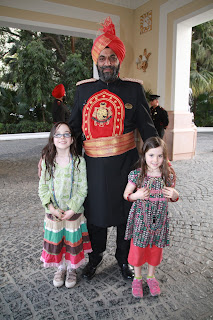 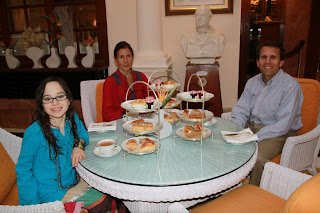 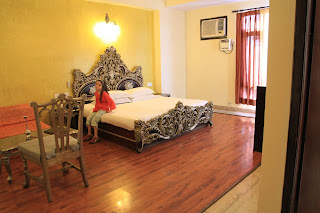 Yes, we dine places that offer Aloo Gobi on one side, and Kung Pao Chicken on the other. And yes, of course I mock my father for ordering from the Chinese menu at each of our restaurants. I must sadly confess that my children eat an awful lot of scrambled eggs. My mother, who has lost her voice for much of the trip, orders just soup or tea everywhere we go. So it's only me ordering Indian food -- "no spicy" in the hopes that my children and parents might actually try and like it. I will say this: when I order well, my children and mother do like much of the Indian food (but my father will stick to his chow mein, thank you very much). At dinner tonight, for our last meal in Jaipur, our table order is typical: one bowl of wonton soup, one Chinese chicken stir fry, one scrambled egg, one chicken dumpling (called a mo-mo), and one "little spicy" chicken tikka masala.

Our favorite meal is at the least fancy restaurant of our trip, today for lunch. It is still very clean and obviously meant for some tourists, since there is an English-language printed menu. But it seems more geared at Indian middle class, and offers the local specialty, a thali (platter with many small dishes on it). In the "fancy" restaurants, they actually have a separate area where our driver eats, and I must say that bit of colonialism irks me each time. In this restaurant, he just sits down and eats with us, which we all prefer. He steers me away from one thali, "No, that is not for you," to the one below, which turns out to be my favorite meal in all of India, and the whole meal costs us $12 for the 6 of us, versus the $30 for the 5 of us (without the driver) that we've been paying at the fancier places. It's a vegetarian meal and is so good that even the girls and my mother keep asking for more and more bites off my plate. It doesn't actually look huge, but in fact there is plenty to share. The girls and our driver order dosa (Indian crepes, basically). 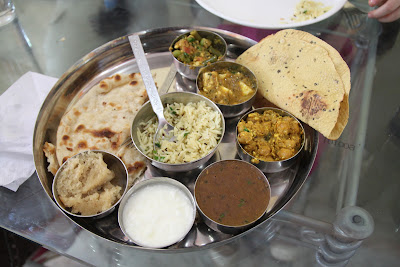 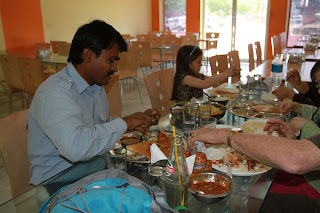 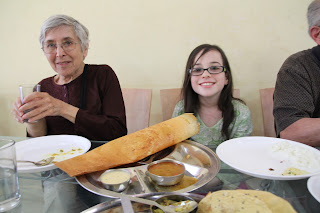 I will admit that between careful ordering and eating, along with brushing our teeth with bottled water, and sterilizing all fruits and vegetables that have been brought into my brother and sister-in-law's house, none of us get even a touch of Delhi Belly during our trip here (and knock wood, only two days to go...). But I'm not 100% convinced it's because we've been eating in fancy restaurants. The worst food poisoning of my life -- and Andi's too, I'm sure -- was when we ate in a so-called "nice" restaurant in Indonesia. It was fancy enough to have electricity and refrigeration, which only meant that instead of making the gado-gado sauce fresh, they re-heated it, and not long enough to kill whatever godawful germs were in it.

Because of that, and the fun of buying things from carts, I am normally a huge street food fan. As is my brother, and sister-in-law, neither of whom have had any street food here at all in the five months they've been living here. In desperation one day, I do have one street food fried-potato thing, but I must admit that while I am good at choosing carts that look quaint and trustworthy in places like Thailand, Indonesia, Peru, and Mexico, here they mostly just look dirty and scary. At one point, while I am shopping for scarves, the girls look longingly at an ice cream cart. Even the scarf shopkeeper, Indian himself, tells them unequivocably "No! You don't want that!" 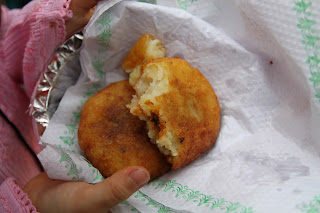 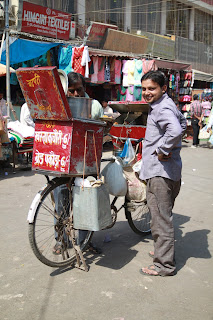 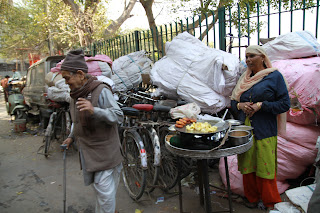 Besides the potato, the only other things we buy from a cart are a coconut and a wrapped/industrially produced ice cream bar. The coconut is safe because there's juice to drink. Tip on coconuts that I learned in Sri Lanka: If there's still liquid in it, it's sterile (since with any hole the liquid would just evaporate). So sterile, in fact, that during WWII in Sri Lanka, they used coconut juice for intravenous liquids during surgery and recovery. 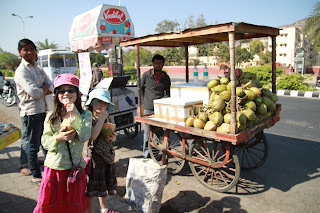 Other food factoids and explanations of the photos below, clockwise: 1) Do not adjust the color on your screen. Carrots in India are red. 2) In India people just live out their lives on the street, and the man below is probably upper-middle class, and using the sidewalk space to make 100 chapatis or naan in the barrel/fire-oven shown. 3) We still don't know what these little green fruits are called, but they're nearly flavorless. A candidate for the least interesting tropical fruit ever. 4) While jack-fruit is delicious when yellow, juicy, and ripe, I apparently don't know how to pick one. This is a young jack-fruit, and therefore more vegetable than fruit. 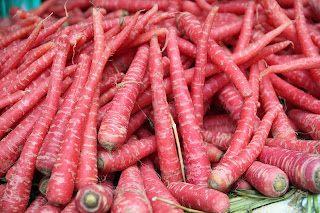 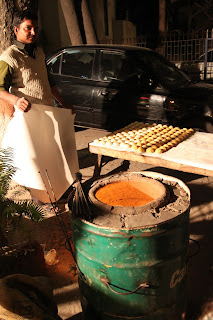 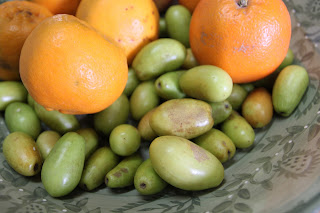 Email ThisBlogThis!Share to TwitterShare to FacebookShare to Pinterest
Labels: food