Hindus of the Caribbean

Today we visit Akshardham temple which I dub "Hindyland," for a variety of reasons but mostly because the movie/event portion we experience is a cross between a certain favorite ride at Disneyland and Hindu. Let me just call it as I see it: It's "Hindus of the Caribbean." My sister-in-law, who is far classier than I will ever be, tactfully questions whether calling it Hindus of the Caribbean in Hindyland is, perhaps, tactless. And so I would like to clarify that I'm not actually trying to make fun of it so much as paint you a vivid picture. For those of you who have the same cultural references I do, this should pretty much clue you in to the room by room life-like scenes re-created with a combination of minituarized faux-architecture, outdoor landscaping indoors, and animatronic story-telling. The ride we are on has us walking from room to room, but another of the "experiences" has you actually sitting on a boat for the show. However, as my sister-in-law so correctly points out, in a country where the literacy rate for men is about 50% and for women only about 25% (no, I didn't verify these numbers), this is a very effective way to convey the history and message of this temple, and Bhagwan Swaminarayan, the guru for whom it is a monument. 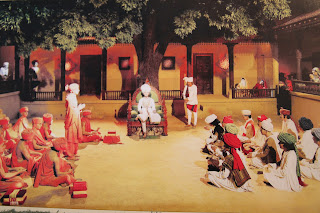 Now, we are subjected to 40 minutes of prosletyzing in the Hindus of the Carrbbean "ride," followed by another 10 minute show of some sort that we skip, followed by another 40 minute wide-screen film (also very, very loud: what it is with volume control here?!) of more description of the guru's life and teachings. So, yes, again prosletizying. I am not ever a big fan of evangelical conversion attempts, but even I have to admit that Hindu conversion attempts may be the least offensive attempts ever. Unless you don't like the "Veg is Power" anti-meat sign at the end. It's hard to argue with ideals in non-violence, tolerance, education, and the seeking of happiness in every day life, and the guru did do what he could to eliminate the practices of sati (women killing themselves on pyres after their husband's death), untouchability, and opression of women. For the 1700s, that's quite enlightened. And, frankly, even for the 2000s, it has some resonance.

The temple itself is relatively new -- within the past decade or so -- but made to look old and certainly aiming to be impressive. It's really quite stunning, but sadly the place is more secure than Fort Knox -- certainly more secure than any airport I've been through -- and as a consequence, we are not allowed to bring in cameras (or cell phones, or even USB ports). Walking through this temple complex without a camera is a form of small torture for me, and it's absolutely killing my father. This also explains the photos on this page are actually photos of the pictures in the souvenir book he's bought (except for the one vertical below, taken from outside the fence). There are bejeweled rooms, huge golden statues, hand-carved marble columns and stone statues, over 1,000 elephants, etc, and walkways with arch after arch after arch. It's a 100-acre complex that took five years -- but 300 million man-hours -- to build. 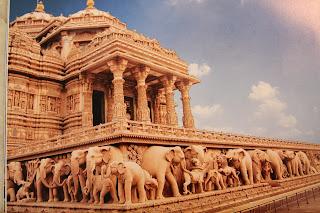 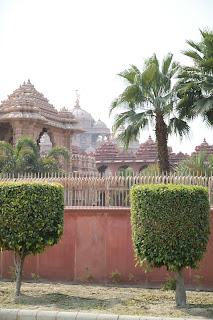 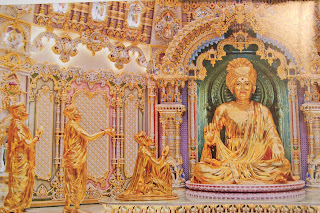