Agra and the Taj Mahal

The Taj Mahal really is everything it's cracked up to be. It's not the most famous and recognizable building in the world for nothing (think about it: can you name one other building that could be instantly identified by so many? The Eiffel Tower is probably just as recognizable, but it's a tower, not a building. Yes, I'm splitting hairs). Given that the Taj Mahal was built as an enduring symbol of love, I cannot help but include a photo of my parents, married 52 years and going strong! 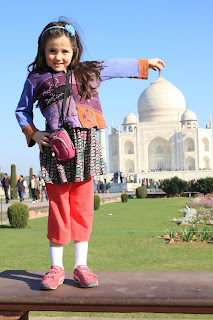 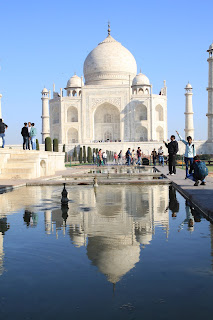 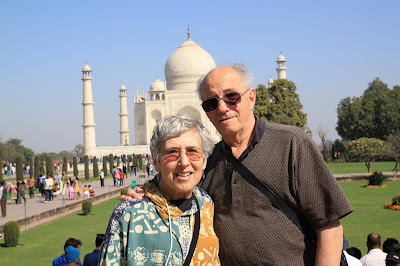 And at the Taj, there are also beautiful red sandstone buildings, including a mosque on the side. 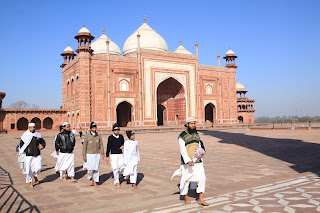 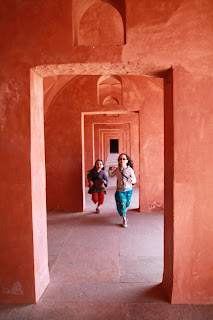 The only sad part about our trip to the Taj is that my brother and sister-in-law are supposed to join us but run into a series of bad luck. We are a in a convoy, with them following us and our hired driver/van for the five hour trip to Agra. But while still in Delhi city limits, the transmission of their car dies. They rush home, get it to a shop, and change cars, then following a GPS proceed to drive for five hours but make it only about 30 miles from home, since the GPS has taken them on the old road instead of the new highway. We are all disappointed not to do the Taj with them, and can imagine how frustrating that must have been for them. On the other hand, they got some fascinating photos and have an interesting story to tell about the time it took them one solid hour just to cross a crazy intersection. That kind of traffic is as much India as the Taj is, and you can read about it in "Road Rules", once it's posted.

Agra Fort, in the same town and just across the river from the Taj Mahal, is almost as impressive and picturesque as the Taj Mahal. 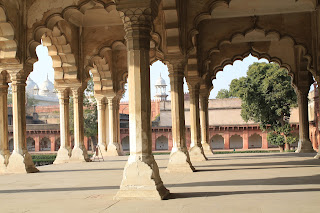 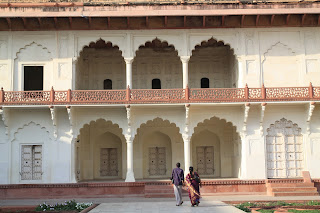 Our guide here, Sanjay, is amazing, and if any of you are going to be in the area and want a guide, we have his contact info. Knowledgeable, funny, great with the kids, and also excellent English (and Japanese and Spanish). You'd think that since this is India, the English would not be an issue, but I can say without exaggeration or melodrama that from all my travels in Asia -- and even comparing with countries such as Indonesia and Thailand and Vietnam nearly twenty years ago -- this country has the worst level of English I've ever experienced. There are some people who do speak English, but with such a heavy accent, it is absolutely incomprehensible. And there are many, many others who don't even have the simplest grasp: We found we had to use classic traveler pantomime to communicate even with the people working at the customs counters in the airport, a place you would really expect some command of at least numbers (one, two, three).

Email ThisBlogThis!Share to TwitterShare to FacebookShare to Pinterest
Labels: monument, on the road