Bahrain, Mainly on the Plane

Given that we are only in Bahrain for a three hour layover, I never expected to write about it. But, we are three Californians stopping in the Middle East while traveling from Paris on their way to India, and so, naturally, we find ourselves eating chicken fajita quesadillas and chicken poppers & fries at a branch of Chili's. And so, I must write. 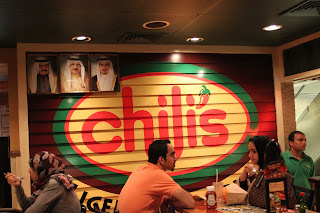 Seeing women wander around the airport so covered, many of them in full burkha, incites my inner angry feminist (yes, the one who wears comfy shoes while traveling in Croatia and other far-flung lands). I try to take a couple photos but get unusually self-conscious about it. There's only so much that I can pretend I am taking photos of the Chili's railing.

The front page headline on the Gulf Daily News (the voice of Bahrain) screams "STOP THE MEDIA SMEARS," saying that "travel agencies as well as traders are also bearing the brunt of the negative publicity and the continuing street violence targeting the police and public..." Immediately below this is a story, by the Gulf Daily News, titled "Thugs attack police after funeral." 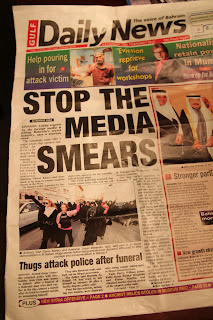 At one point, we are watching a video screen, and I think, "Boy, even here in Bahrain, they perpetuate the sitcom stereotype of a bunch of Arab men in black full-length robes, white turbans, and shiny black Ray Bans." Then I realize it is not a sitcom but rather a shot of a real-life horse-race.

We are sitting at a Starbuck's (yes) playing card games with almost 50 minutes before our flight is scheduled to leave when G hears "final boarding call for gate 32." I'm wondering if the clock is off and how we could possibly be having what Anthony and I call a "Cinnabun moment" (one time we were lounging at a Cinnabun in the Detroit airport and missed our flight to Mexico because we had set our watches to the wrong time zone...). We run through the airport and make it to the flight, but just barely, since they have decided to leave half an hour early.

And that, folks, is the three-hour layover version of Bahrain.