But the Real Star Attraction Is....

Today my sister-in-law takes us to visit Qutb (pronounced Koo-tab) Minar, an ancient Islamic monument in Delhi, built starting in 1192-1193. Not nearly as famous as the Taj Mahal, of course, but quite impressive nonetheless. The centerpiece of the complex, the minaret, is the tallest in the country at 72.5 meters (238 feet). 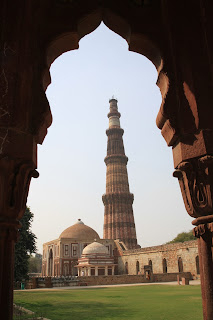 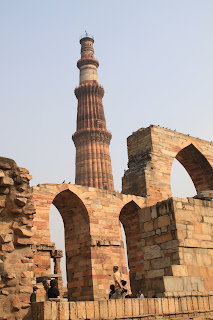 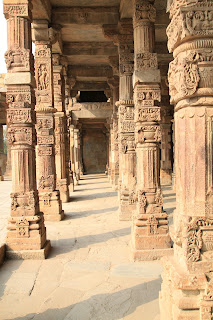 My father, being my father, gets equally excited about the Iron Pillar, which he has heard about in some documentary program. It's an alloy of something like 14 metals and has stood outside in this courtyard for almost a thousand years, even through monsoon seasons, without rusting. The information I get from my father, which comes from what he remembers of the program, is that nobody can replicate this or even knows quite what it's made of. However, I must warn you that my father is notorious for his facts not being, well, quite so factual, and I just can't be bothered to research this one in depth. 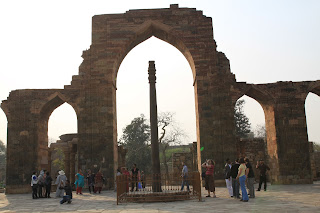 But the real star attraction is not Qutb Minar or the Iron Pillar but, rather, our girls. It turns out we do not have to tip people or sneak around in order to take their photos, beause we can simply do an even trade: They desperately want photos of our girls, and then we get to take pictures of them in their traditional clothes. The only two groups of people I say "no" to happen to be two groups of young men who grab P without asking my permission and start putting their arms around her and whisking her into their photos. I tell them in no uncertain terms, "You must always ask the Mama first!"

For example, we have a picture of this handsome couple celebrating their first wedding anniversary. And they have a picture of our two girls in front of the same monument. There's the Moslem man checking his cell phone after photographing P, and other families eager to get G & P in their photos. 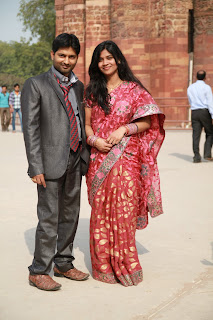 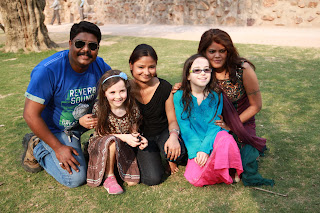 My father is lurking behind a group of colorfully dressed Indian women and wants to take their photos when suddenly my girls step into view up on a hill, with the tower behind them. All the women start screaming "Baby!" (what all young children are called here) to get their attention for photos. So, naturally, my father starts taking pictures of his own grandchildren, then turns to the women and brags that he's the grandfather and gets his photos of the sari-clad women that way. And, being brought up in a photographic family, I of course take photos of my dad and the ladies taking photos of us. 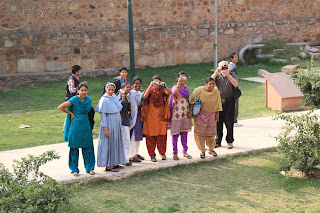 By the way, it's not just here that the girls are stars. There must be literally hundreds, verging on thousands, of photos of them taken on our entire trip here. By the middle of our trip, P starts waving out of the car windows to gawking passers-by, like a princess doing the royal wave. We may need an ego check when we get back to Paris...