The Anguish of Silver Lamé

Our first day in India, and we start off with a bang -- rather literally. The Bollywood show we go to see, Zangoora, is performed at roughly the decibel level of an airport runway. But this is what I expect of India. It's the opposite of the subtle black-and-whiteness of Paris. This show contains Ganesh the elephant god wih many trunks; girls in Vegas showgirl outfits with pink tail feathers; gypsies; an underwater scene; so many actors flying through the air it's like O'Hare Airport in there; confetti over the audience; Cirque du Soleil-style ribbon contortionism; a dwarf; forlorn lovers crooning in silver lamé; sequins; a magician levitating his lovely assistant; people dancing in the aisles; fog machines; rising stages; turning stages; people declaring their love in gold lamé (and that's the men...); troupes of shirtless men with six-pack abs; princes and princesses whose royalty is a secret; rainbow colored saris -- all of them glittery, sparkly, metallic, and reflective; and all of it performed in Hindi.

No photos allowed inside, so here are a couple photos of the outside of the theater. They're very tame in comparison. I also have to tell you that it's taking me about 10-15 minutes per photo to upload these pictures, so I'm probably going to be pretty sparse with the photos till I get back to Paris. Or maybe I'll have a better connection on another day... 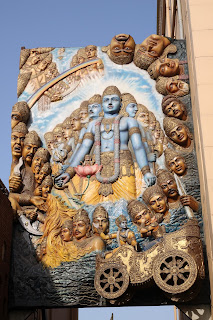 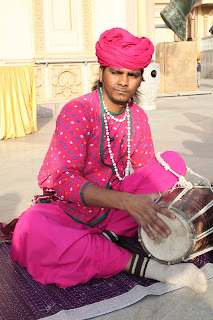