Attack of the Killer Monkeys

Today turns out to be wildlife day, and we start it off with a rickshaw ride through Keoladeo National Park in Barhadpur for birdwatching. I must admit that it takes our family a little while to settle into the pace of slowly biking through and finding birds hidden among the branches. We are generally more of a hit-you-over-the-head-with-your-entertainment kind of a family (see: Bollywood), and since none of us are birdwatchers, it's not all that meaningful when our drivers stop, make us search deep in the leaves, and whisper to us reverentially, "You are lucky! It's a rare blue-breasted double snoot-warbler." Yes, of course I'm making that name up.

We prefer the owls, which are both more visible and a name we recognize, and the bigger and more colorful birds, even if they're as common as dirt. But still, eventually we do settle in and rather enjoy being trucked along at a gentle pace among the birds. The rickshaw is so slow-paced that sometimes we get out and walk, and we are still going faster than it is. We see large mammals also (but alas, no excellent photos as proof), and we all especially love seeing the spotted deer with big antlers leap across the pathways.

My personal favorite of the birds is at the end, at a marshy lake. The lake is spotted with tiny islands which are in turn spotted with Siberian Cranes. I'm clearly not a National Geographic wildlife photographer, but still you can see the many, many, many crane nests up in the trees. 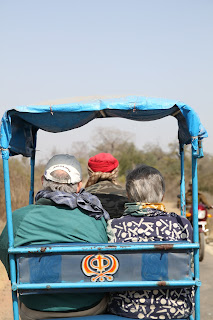 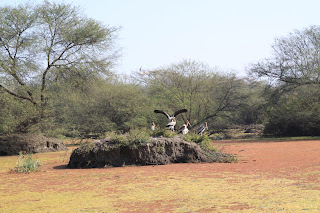 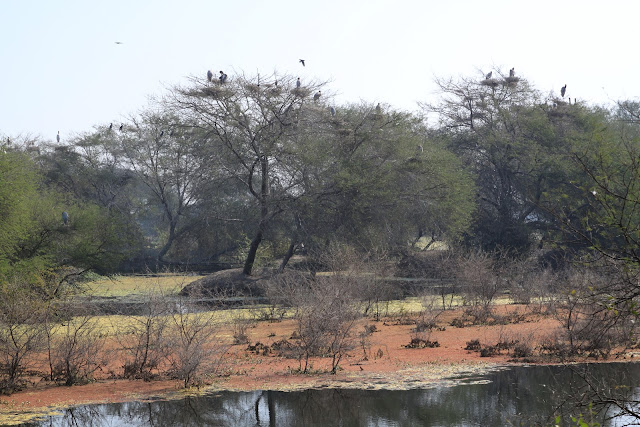 P comes down to the water's edge with me to take a photo and, because the lake is so marshy, she steps onto what she thinks is land, only to sink into the muck. She is both laughing and crying simultaneously, and we solve it somewhat by removing her leggings and her wet shoe and sock. G sacrifices one of her socks, so P is walking around with one shoe and one sock ("Diddle diddle dumpling, my son John, went to bed with his trousers on, one shoe off, one shoe on, Diddle diddle dumpling, my son John."). Except that my parents' rickshaw driver takes quite a shine to our little P. I mean, really, the adoration of this kid is getting ridiculous here: He insists -- and it is clear if I protest any more he will be deeply insulted -- on buying her a bag of potato chips from this little shack of a canteen, which is also frequented by goats and cows. He carries her around lovingly, and she eats up the attention more ravenously than the chips, even. 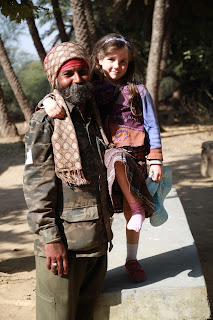 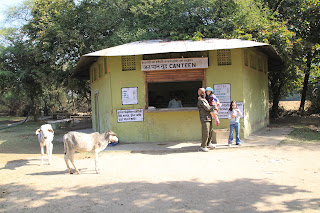 After we leave Barhadpur, we stop along the way to Jaipur at a tiny little village. Actually, collection of a few dirty shacks would be closer to the truth. And here we see a cow (one of a million, and counting...), and the cow patties that are carefully gathered, formed, dried, and then used as fuel. And we have a picture of P & G trying to walk a goat. It ends up walking them, instead. 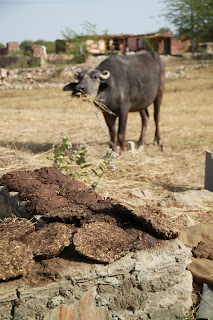 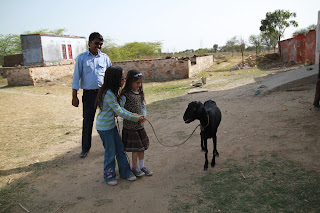 As we approach Jaipur, P becomes our group's crack peacock hunter. Of course, it's not so hard to spot them when there are literally dozens all around. But still, she spots them first. They are the national bird of India, which seems quite fitting when you see the women in their emerald and turquoise saris. 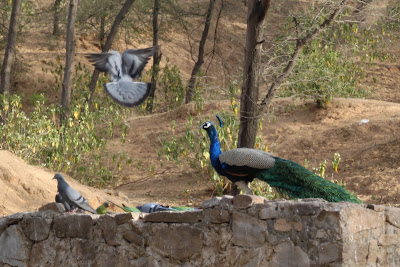 But the animal that make the biggest impression is the monkey. Make that monkeys. A troop of monkeys. A barrel of monkeys. A cartloads of monkeys. (All official terms: look it up!) We stop at Gultaji temple, just at the edge of Jaipur. We are there in the evening, and standing at the top of the temple complex, we suddenly hear this thundrous screeching. I am standing with my dad, and we turn to see the source of the noise, and see something like 100 monkeys descending on us from above. I don't even have a chance to get my camera out for a picture of the flood pouring down on us, but I do regain my composure in time to snap about 10 pictures of my mom, girls, and Dinesh (our lovely, lovely driver/guide). In each of the 10 pictures, there are about a dozen monkeys, yet they're not the same ones! I think the only reason my mother survives this is because her instinct to protect her grandchildren against the onslaught of monkeys is just slightly higher than her instinct to jump off the nearest ledge to avoid them. They race down the steps and swarm over the temple complex and surrounding cliffs. 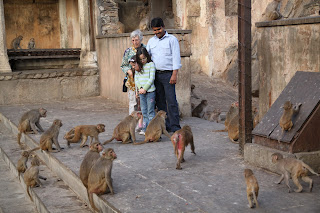 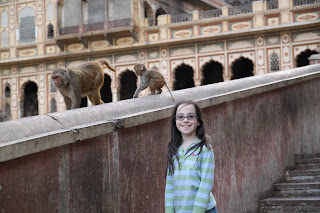 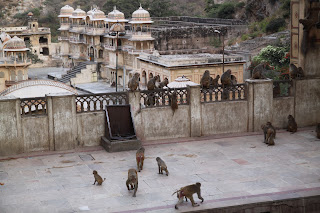 At the end, we witness a small altercation between monkeys (one pushes the other into the water in order to steal his peanut) and one large altercation (when a loud, screeching struggle over some food leaves one monkey with a tail stripped of fur and bloodied). G, of course, comes to tears over this. "Why can't the monkeys just work it out nicely?!"

But the question of the hour is asked by P, marveling at all the primates: "But how did monkeys dissolve into humans?"

Email ThisBlogThis!Share to TwitterShare to FacebookShare to Pinterest
Labels: animals, monument, on the road